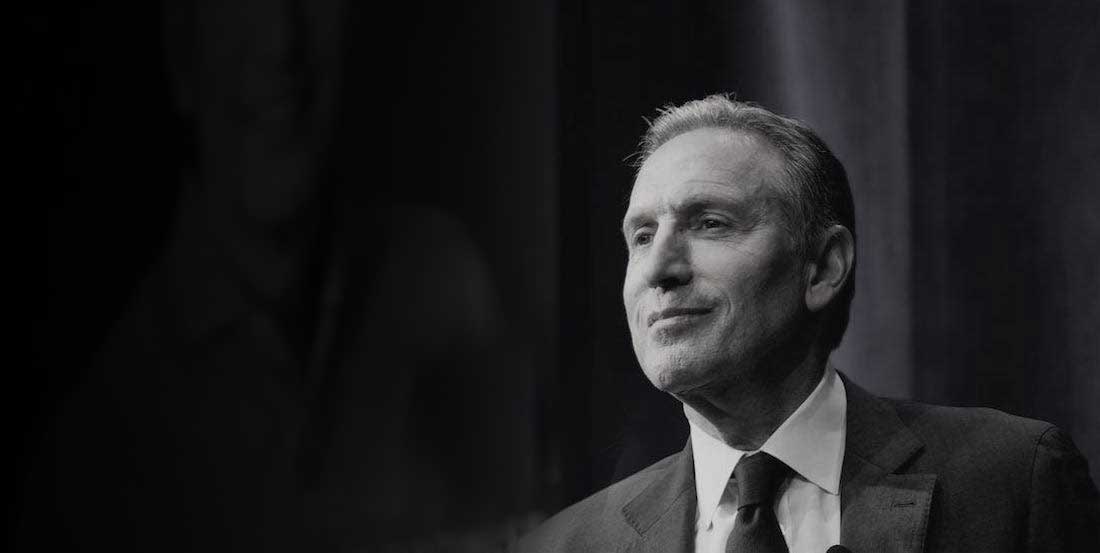 Howard Schultz has a net worth of $3.5 billion, and his presidential aspirations are going to be with us for a while, because he said on February 5th that he will take “three to four months“ before deciding whether he’ll really run. But, for some reason, Schultz often doesn’t vote, so he may not really be aware of how elections works. He is so clueless that he was shocked a box of Cheerios costs four bucks. And he would hope that we wouldn't call him a billionaire and simply think of him as a 'person of means', even while he opposes tax increases and even while he invested in the scandal-plagued for-profit Capella University and tax shelters for his rich buddies. And most recently, he bombed at SXSW.

He used to work at Starbucks, and I'm sure he had a hand in telling Starbuck's management what they should make their employees say about him, because he still owns roughly 3% of the company's stock, and while his salary at was $1 in 2018, he received $30.1 million in total compensation from the company. His presidential run might impact his own bottom line, since short sellers have been rushing into Starbucks stock as Schultz weighs his 2020 bid. And I guess he's making money with his book, since it is for sale at the counter at Starbucks and you get a free drink with each copy. He created his own corporate personality cult by traveling around and giving seminars to employees, even in the depth of the recession. And a little known Starbucks factoid is that the Gulfstream G650 owned by the corporation has the registration tag N211HS, with the HS standing for Howard Schultz.

When asked "if the prospect of spending $300 or $500 million changed his mind" about running for president, Schultz replied succinctly: “No.” Even the Wall Street Journal thinks that running as a “centrist independent outside of the two-party system” is a "terrible" idea, and The Atlantic says that “He’s Ralph Nader without any of Nader’s redeeming qualities." Why? Because polling shows that Schultz "currently draws (6-9% of the popular vote) from voters" who would otherwise vote for the Democratic nominee rather than those who would support Trump. That means he could pull a Nader that could end up withTrump back in the White House. Green Party presidential nominee and Putin squeeze Jill Stein promotes his candidacy, of course. At least Schultz will release his tax returns, according to an adviser, so maybe we can be sure he's not a puppet.

In the aftermath of the 2015 police shooting of Mike Brown in Ferguson, Missouri, Schultz launched Starbucks’ "Race Together", which directed baristas to engage customers in a dialogue around racial issues with prompts like, “In the past year, someone of a different race has been in my home ___ times.” The effort was shuttered after just a week. Starbucks also famously closed all of its locations for a day last year to conduct racial-bias training, after arrest of two black men arrested at a Starbucks Philadelphia sparked a national outrage—a move some critics dismissed as a PR stunt. And recently, he gave the wrong answer (cue harsh buzzer sound effect) when asked about it: "I didn’t see color as a young boy and I honestly don’t see color now.”

As for his hometown of Seattle, Howard left a bitter taste in the cities mouth, where he’s known for treating a public park like private property and throwing away the city’s NBA team. One of Starbucks’ founders, Gordon Bowker, says Schultz is “vindictive.... He’s instinctually defensive and self-protective... He’s not an honest person.” Schultz himself spins it this way: "In this city, I have realized dreams and made mistakes. It’s true that Seattle and I have had a complicated relationship."

Splinter News has a new series called Dumb Starbucks (Man), an accounting of the "dumb-as-shit things Howard Schultz is doing and saying as he pretends to run for president", the first of which is The other thing is: He’s really dumb. He keeps saying super dumb things. That was inspired by Dumb Starbucks, a parody store in LA, that eventually shut down. Of course, there is the video of the heckler who yelled "Don’t Help Elect Trump, You Egotistical Billionaire Asshole", which inspired this site.

Which brings us to this: "Some ideas about how to make the world better require careful, nuanced thinking about how best to balance competing interests. Others don’t: Billionaires are bad. We should presumptively get rid of billionaires. All of them." You can comment here, but don't be an asshole or I'll ban you. You should read the basic rules for Disqus.